CLEVELAND, Ohio – There’s a moment in the 2006 film “United 93” that requires you to catch your breath.

In the movie’s climactic sequence, airplane passengers – played by unknown actors to heighten the realism — band together, breaching the plane’s cockpit to keep the terrorists from crashing it into their intended target.

It’s the kind of realistic, yet surreal art that could only be created and absorbed in the wake of one of the biggest tragedies in American history.

In the 20 years since 9/11, numerous films, TV shows and songs have attempted to process the tragic events of Sept. 11, 2001. Some were as direct and potent as “United 93,” while others took a figurative approach.

They were all part of a huge shift in popular media, and how we consume and react to it. Following that tragic Tuesday, pop culture, like the rest of the world, would never be the same.

Multiple Hollywood films were altered in the wake of 9/11. Images of cities being destroyed were removed from films. Studios postponed several projects outright with the thought that audiences wanted no reminders of Sept. 11 in the beloved pastime of going to the theater.

Movies like the aforementioned “United 93” and “World Trade Center” would eventually arrive a half-decade later. As would Michael Moore’s politically and socially charged “Fahrenheit 9/11.” But it was Steven Spielberg who would ultimately shape the landscape of post-9/11 cinema in 2005.

“War of the Worlds” was the latest in many works through the decades based on H. G. Wells’ 19th century novel of the same name. But the timing of Spielberg’s film adaptation was no coincidence.

“Every iteration of War of the Worlds has occurred in times of uncertainty,” Spielberg told USA Today back in 2005. “We live under a veil of fear that we didn’t live under before 9/11. There has been a conscious emotional shift in this country.”

Footage of Tom Cruise covered in dust while fleeing mass destruction conjured up images of what many of us watched on TV and saw in photos on Sept. 11. “War of the Worlds” wasn’t billed as a “9/11 film,” but it captured the paranoid state of America.

And it was only the beginning. Several movies – many of them Oscar winners – would deal with the after-effects of 9/11. But the biggest shift in Hollywood came with the blockbusters superhero films that would dominate the box office throughout the 21st century.

It was the new hope conveyed by seeing Spider-Man grasping a flag pole or Captain America holding a red-white-and-blue shield on the streets of New York. It was the way big-budget destruction now mirrored real life. Think the crumbling buildings of Metropolis in “Man of Steel,” Bruce Wayne watching Wayne Tower collapse in “Batman v Superman: Dawn of Justice,” Captain America and Thor standing among the dust and rubble in “The Avengers.”

Whether it was a response to terrorism or the image of large cities falling by the wayside, many of the highest-grossing movies in the world carried an obsession with 9/11 for the better part of two decades.

As Robert Downey Jr.’s Tony Stark said in “Iron Man 3” — “Nothing’s been the same since New York.” It’s a statement about a fictional battle in “The Avengers.” But it might as well be ripped from real life.

Before the streaming era, albums came on Tuesdays, which meant a series of high-profile releases were set to debut on Sept. 11, 2001. The list included Jay-Z’s “The Blueprint,” Bob Dylan’s “Love and Theft” and Mariah Carey’s “Glitter” soundtrack. But even new music from the biggest artists in the world seemed irrelevant.

In the weeks that followed, music sales dropped 5 percent, tours were postponed and more than 165 songs were placed on of “questionable lyrics,” including Queen’s “Another One Bites the Dust,” AC/DC’s “Highway to Hell,” Dave Matthews Band’s “Crash Into Me” and Foo Fighters “Learn to Fly.”

On the flip side, the music industry leaned into patriotism. Whitney Houston’s “Star-Spangled Banner” Super Bowl XXV performance and Lee Greenwood’s “God Bless the USA” became mainstays on the radio again. Several events, songs and compilations were produced. “America: A Tribute to Heroes,” a benefit concert that aired on all four major American broadcast networks, raised $150 million to aid victims of the Sept. 11 attack.

But it wasn’t all positive. No one felt the impact of America’s post-9/11 uber-patriotism more than the Dixie Chicks. The platinum-selling country act found itself blacklisted in 2003 when lead singer Natalie Maines spoke out against the pending war in Iraq, saying “We do not condone this war. This violence. And we’re ashamed that the president of the United States is from Texas.”

In the years after the Sept. 11 attacks, country music had produced more anthems of patriotism than any other genre, most notably Alan Jackson’s “Where Were You (When the World Stopped Turning).” Maines’ words were rejected by a genre whose fans weren’t willing to accept any criticism they perceived (even wrongly) against the country or its leader.

The Dixie Chicks would make their triumphant return in 2006 with the Grammy-winning “Taking the Long Way.” By that time, President Bush’s approval rating had reached an all-time low as most Americans now agreed with Maines’ sentiment.

The backlash thrust upon the Dixie Chicks (who now go by The Chicks) is now viewed as a dark moment for an art form built on being anti-establishment. Fittingly, Maines would serve as a primary anti-Trump voice during the last two election cycles.

The Golden Age of TV

Television’s initial response to 9/11 was similar to that of the movie and music industries. TV executives and producers walked on eggshells as episodes of popular shows were either edited for sensitive material or removed from the schedule altogether.

The shows that did attempt to immediately respond to the Sept. 11 attacks usually misfired. Even “The West Wing’s” terrorism-themed “Isaac And Ishmael,” produced in the wake of 9/11, stands as one of the critically acclaimed series’ worst episodes.

Other series fared better. “24” and “Homeland” were gripping showcases of the country’s response to terrorism, while “Rescue Me” earned rave reviews for Dennis Leary’s portrayal of a New York firefighter suffering from PTSD. Yet, where TV saw its biggest shift was in a new “Golden Age” driven by tragic, “prestige dramas” that reflected the somber mood of a nation.

“The Sopranos,” perhaps the signature series of the era, debuted in 1999 and felt the effect of the Sept. 11 attacks immediately with the removal of the Twin Towers from the show’s opening sequence. But the spirit of the show also changed in Season 4, its first following 9/11.

The season’s premiere episode made direct reference to the attacks when Bobby tells Tony, “World went downhill after the World Trade Center” before referencing the “End of the world…” The proceeding episodes see Tony and Carmella’s marriage hit rock bottom, Christopher falls deeper into addiction and the beginning of the end for Adriana after becoming an FBI informant.

From that point on, “The Sopranos” carried a sense of paranoia, anxiety and dread. There was an unwavering feeling that something bad would happen, which made it all the more relatable for the time. And ratings reached an all-time high.

It was just the tip of the post-traumatic TV iceberg. Shows like “Lost” and “Six Feet Under” would serve as even greater examples of post-9/11 television by conveying a sense of trauma and loss that was present in society. Meanwhile, “The Walking Dead” would become the biggest cable series of all time with its signature image being an abandoned city ravaged by a post-apocalyptic event.

Those series along with others — “The Wire,” “The Shield,” “Deadwood,” “Breaking Bad,” “Game of Thrones” — were therapy for many. Part of it was the pastime of watching great TV. The other part found viewers coping with anger and sadness by watching their favorite characters go through the same thing.

Ironically, it’s a quote from “Six Feet Under,” a show obsessed with grief, that offered up the most poignant message from popular culture in the post 9/11 era:

“You can do anything, you lucky bastard. You’re alive! Push through the pain and keep living. What’s a little pain compared to that?”

Fri Sep 10 , 2021
It offers personalized framing and artwork provides and is aiming to give artwork lessons as nicely The COVID pandemic has brought about numerous alterations for smaller firms. For Artsie owner and operator Dale Morrish, the time was invested shifting to a new, upbeat location in Timmins. She relocated from a storefront […] 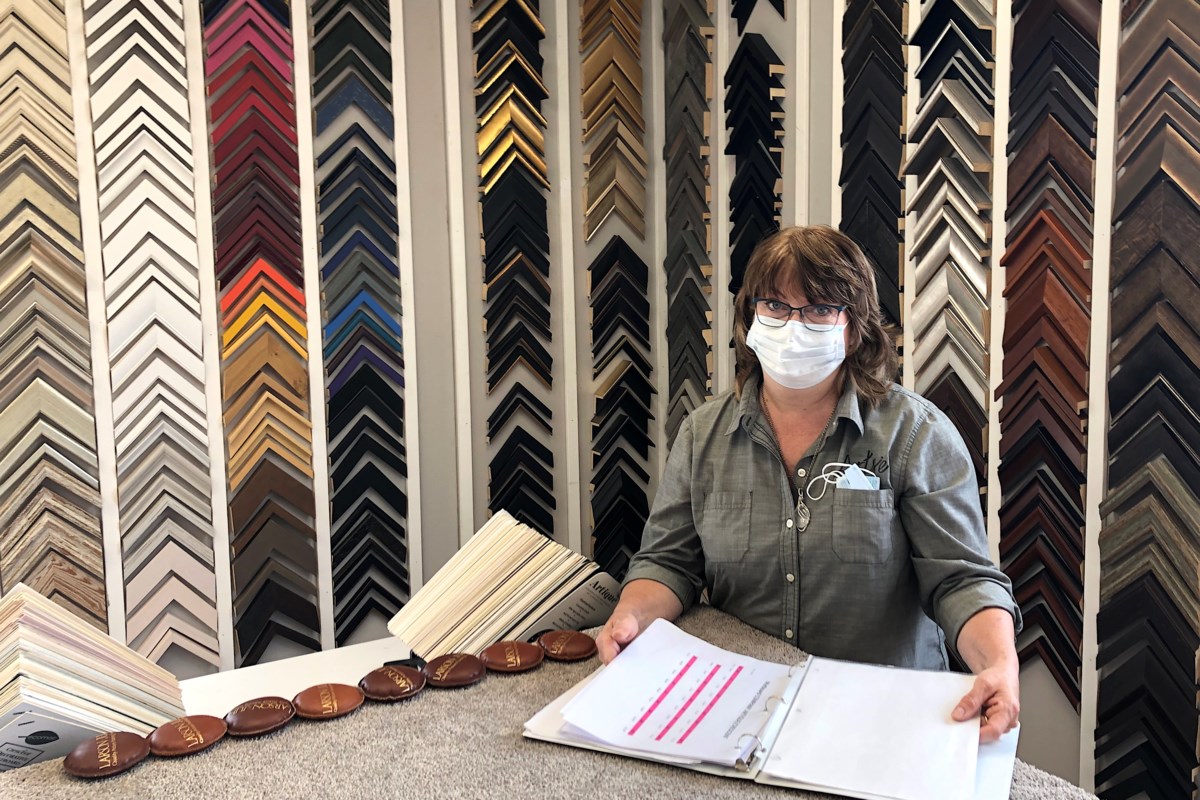